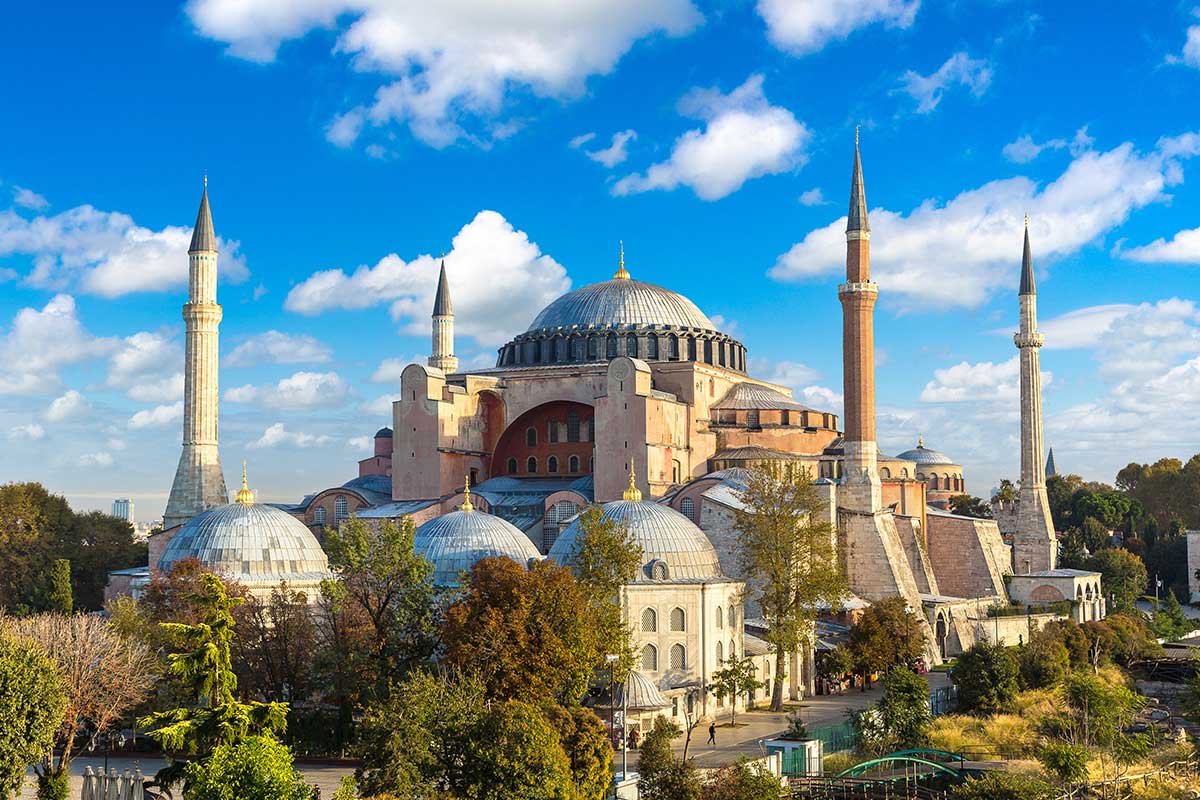 The Washington Post recently ran this informative feature on the Turkish government’s plan to convert Hagia Sophia to a mosque, and the race against time of those who want to see the venerable church preserved as a museum open to people of all faiths. The Order of Saint Andrew the Apostle, Archons of the Ecumenical Patriarchate, is gratified to see this issue receiving media attention, and hopes this will help spur active efforts to protect Hagia Sophia.

Read this article on the web site of The Washington Post

Ecumenical Patriarch Bartholomew I of Constantinople lowered his voice in exasperation. “What can I say as a Christian clergyman and the Greek patriarch in Istanbul? Instead of uniting, a 1,500-year-old heritage is dividing us. I am saddened and shaken.”

The 80-year-old spiritual leader of 300 million Orthodox Christians worldwide was referring to the Turkish government’s plans to convert Hagia Sophia, a 6th-century Byzantine cathedral and one of the most precious architectural wonders of the world, into a mosque. For centuries, the terra-cotta-colored building served as the largest church in the Christian world. When Ottomans conquered Istanbul in 1453, they carefully covered the mosaics and turned it into a mosque. In 1934, Mustafa Kemal Ataturk, the founder of the modern Turkish state, turned it into a museum — both as a testament to the country’s new secular principles, but also as a signal of its desire to be anchored to the Western world.

Not surprisingly, Turkish President Recep Tayyip Erdogan now wants to turn it back into a mosque and has instructed aides to find a legal formula. Hagia Sophia has long been a coveted symbol for Islamists who resented Ataturk’s desire for a West-leaning and secular society, but no Turkish government had so far touched his legacy. Erdogan’s move this time is partly driven by a populist desire to consolidate conservative Muslims at a time of declining votes for his party.

But what is particularly troubling about the Hagia Sophia debate is the toxic language, which echoes centuries of religious rivalry in this part of the world. In late May, Erdogan participated by video in a Koranic reading of the “Conquest” verse (“surah”) at Hagia Sophia, “We will leave behind a Turkey befitting of our ancestor Fatih [the Conqueror],” referring to the Ottoman sultan who captured Istanbul in 1453.

Under Erdogan’s resurgent Turkey, “conquest” is a useful theme to rally nationalist sentiments. Before each incursion into Syria by the Turkish military, Turkey’s Directorate of Religious Affairs instructs mosques to read the “conquest” verse from the Koran. The ministry of culture and Istanbul municipality have been celebrating the “conquest of Istanbul” each May 30, with greater and greater ferocity over the past decade. Erdogan’s nationalist ally, Devlet Bahceli, has called the opening of Hagia Sophia as a mosque “the gain of the sword.”

“But who is this conquest against?” asked a Greek Orthodox friend of mine from Istanbul. Turks have been running Istanbul for nearly six centuries, and the handful of Christians left in the country pose neither a cultural nor a political challenge to anyone. Out of a population of 82 million, there are less than 90,000 non-Muslims living in Turkey at the moment — including Armenians, Jews, Assyrians and a few thousand Greeks — and in the words of Hrant Dink, a journalist of Armenian descent assassinated by a nationalist in 2007, most live “with the trepidations of a dove.”

Christians in the Middle East, with the exception of Lebanon, have every reason to have trepidations. Their experience for the past century is marked by pogroms, property confiscations and discrimination. Secular Turkey has not been that different. While the Ottoman Empire practiced religious tolerance, the modern republic was founded after a war of liberation against an invasion from Greece and Western powers at the end of World War I — and the regime suspected Christians of disloyalty. There were population exchanges between Turkey and Greece and a deliberate effort to reduce the role of non-Muslims in bureaucracy and business. Thousands of churches across Anatolia were deserted and eventually destroyed. In 1955, a pogrom in Istanbul led to the exodus of the remaining Christians.

Ironically, it was Erdogan himself who pushed back against some of these oppressive policies early in his tenure. He brought non-Muslim leaders into the state protocol, showed flexibility to faith-based foundations, returned some of their confiscated properties and, during a honeymoon with Europe, even entertained the idea of opening the Greek Orthodox seminary in Istanbul closed by the Turkish state in 1974. But in reality, Erdogan and other Turkish politicians have little use for old churches and aging priests, other than as a tourist attraction and a token of diversity.

All of that makes the Hagia Sophia debate sad — a fight against time. With a handful of Greeks left in Turkey, how long can empty churches survive?

Patriarch Bartholomew believes forever. “We survived for 17 centuries and we will stay here forever, as God wants us to,” he said when I visited him last week.

I hope he is right, but fear that in the long run this is fighting a losing battle — at least on Hagia Sophia. Turkey’s Christian community is vanishing, and with it the diverse fabric of our country. Turkey will be immeasurably poorer if that heritage is lost. Converting Hagia Sophia into a mosque would also feed anti-Muslim sentiments among the far right in Europe and the United States. I hope Turkish leaders can acknowledge that — and pause the Hagia Sophia debate.

When Ottomans came to Istanbul, which they called Konstantiniyye after the name of its Byzantium founder, there was no mosque here. Today, there are almost 3,500. Let this remain a monument to our rich history.