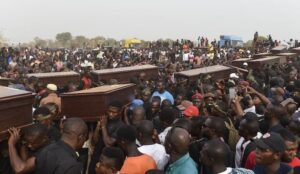 Persecution of Christians in Nigeria continues to increase rapidly — but this persecution rarely makes the news outside that country even as it escalates dramatically.

Nigeria is about 50% Christian. Of those Christians, around 75% are Protestant, 24% Roman Catholic. Of the remaining 1%, there is a small Orthodox Christian community. These Christians are being subjected to a ruthless persecution that has gone on with sporadic attacks for years, and has been escalating recently. Targeting the Christians are both the Islamic militant group Boko Haram and Muslim Fulani herdsmen. The Order requests once again that the UN and the US State Department address the persecution of Nigerian Christians, and move the Nigerian government to take decisive action against Boko Haram and the Fulani herdsmen for the protection of its Christian citizens.

For previous coverage of the persecution of Christians in Nigeria at ChristianPersecution.com, see here.

President Donald Trump should appoint a special envoy for Nigeria and the Lake Chad region to “focus like a laser beam” on the attacks by Boko Haram and other Islamic militants, according to one of the main architects of the International Religious Freedom Act of 1998.

Former Congressman Frank Wolf said such a move was necessary to stop a genocide of Christians in the region.

Wolf was speaking to journalists during a press call on the situation in Nigeria sponsored by In Defense of Christians, a Washington D.C. human rights group.

Nigeria has had over 50,000 people killed since 2009 due to the Boko Haram insurgency, which has also displaced over 2 million people. More recently, the Islamic State in West Africa Province, which broke away from Boko Haram in 2016, has increased activity in the region.

In the country’s “Middle Belt” – where the Muslim North meets the Christian South – Muslim Fulani bands have killed thousands of Christians.

During the call, Anglican Archbishop Benjamin Argak Kwashi of Jos described the attacks on Christians in the country.

“This thing is systematic; it is planned; it is calculated,” he said.

The archbishop said Boko Haram has almost succeeded in uprooting the Christian community in northeastern Nigeria, and added it is “very clear that their intention is to Islamize Nigeria.”

However, he said the government is ignoring the problem.

“Every time we have raised our voices to say to the governments that this is going on, they always produced a political narrative to say that it is farmers’ and herders’ clashes. That narrative is an evil narrative of cover up because honest people will be sleeping in their homes at night that will be massacred, but it will be said to be a clash. That is far from the truth,” Kwashi said. “These killings are specifically in Christian villages.”

Dr. Gregory H. Stanton, chairman of Genocide Watch, said these attacks meet the definition of genocide: “It is the intentional destruction in whole or in part of a religious group.”

“This is not a conflict. These Christian villagers – these farmers – have no conflict with the Fulani. The Fulani now arrive with truckloads of fighters, maybe a hundred of their fighters, and they simply massacre a Christian village. They leave the Muslim village nearby completely alone,” Stanton said.

He also dismissed claims that that tribal difference and economic factors were the real drivers of the violence, noting that most genocides happen during civil or international conflicts.

“Denial is part of every genocide; it starts at the beginning of it and usually goes on way after it,” he said.

“Every single person of the 7,600 [people] killed since 2015 by the Fulani militia has been Christian. That’s genocide,” Stanton added….