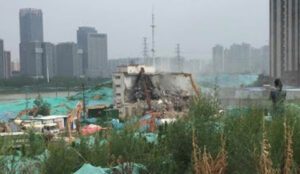 Persecution of Christians in China: recently we saw the Chinese government removing crosses from large numbers of churches. Now it is demolishing churches outright. This is all part of its campaign to weaken Christianity and turn the Church into another organ for its propaganda. This is a matter of grave concern for Orthodox Christians in China and all other Christians as well.

Holy Orthodoxy in China predates this war on Christianity. It has a three-hundred year history in China, with the first Orthodox Christians coming into the country in 1685. In the 1980s, the Chinese Orthodox Church began to experience a revival. Pray that it not be snuffed out. The Order of Saint Andrew, Archons of the Ecumenical Patriarchate, requests once again that the Chinese government end these repressive measures, grant official recognition to the Chinese Orthodox Church, and give full religious freedom to all the Christians of that nation.

For previous ChristianPersecution.com coverage of the persecution of Christians in China, see here.

In the morning, around 200 officials from various government departments arrived at the Sunzhuang Church with cranes and heavy-duty machinery. Personnel from the Zhengzhou High-Tech District Ethnic and Religious Affairs Bureau forced their way into the church and took control of the Christians gathered there. They did not show any legal documents.

Some of the church’s property, including chairs, were tossed outside. At least one Christian woman resisted, and she lost consciousness and had to be taken to the hospital after being pushed to the ground. Another Christian was hospitalized after officials beat her. One male church attendee was taken into custody.

The church was then demolished….