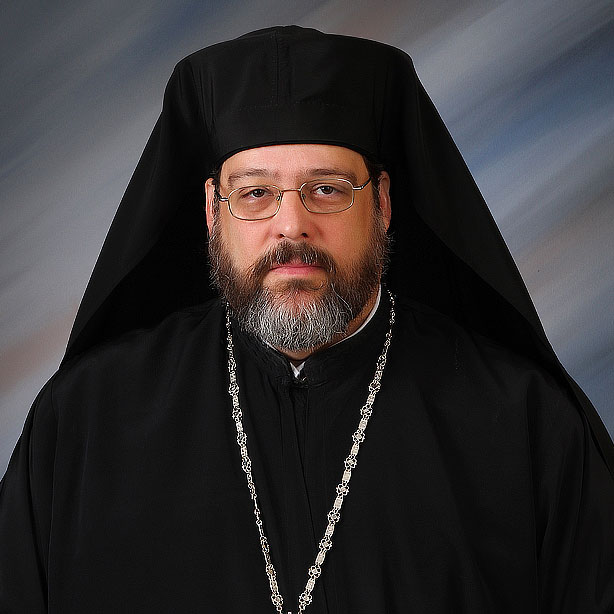 Metropolitan Gregory is a graduate of the University of North Carolina at Chapel Hill earning a BA degree in Biology (1981) and the University of North Carolina at Charlotte earning a MS degree in Biology (1989). Working for more than 20 years in the field of Cardiovascular Research at Carolinas Medical Center in Charlotte, NC, he authored/co-authored over one hundred articles, abstracts, and book chapters.

A true son of the Church, from his early youth Metropolitan Gregory served in his home parish of Holy Trinity Greek Orthodox Cathedral in Charlotte, NC in various capacities including altar server, Sunday School teacher for 13 years and in several leadership positions including Parish Council President. He was also a founding member of St. Nektarios Greek Orthodox Church in Charlotte, NC where he served on the Parish Organizing Committee, as Sunday School teacher for four years, as a member of the choir and as its first Parish Council President.

After taking part in a mission trip to Alaska sponsored by the Orthodox Christian Mission Center, Metropolitan Gregory felt the calling to pursue his life-long dream of studying for the Holy Priesthood. Leaving his secular job in early 2003, he entered Holy Cross Greek Orthodox School of Theology in Brookine, MA in the Fall of 2003 and graduated in May of 2006 with the Masters of Divinity degree.

Metropolitan Gregory was ordained a Deacon at St. Nektarios Greek Orthodox Church in Charlotte, NC on November 4, 2006 by His Eminence, Metropolitan Alexios of Atlanta. He was tonsured a Monk at Agia Lavra Monastery in Kalavryta, Greece on January 17, 2007, receiving the name Grigorios with St. Gregory Palamas as his Patron Saint. He was ordained a priest at Annunciation Greek Orthodox Cathedral in Atlanta, GA on January 28, 2007 also by His Eminence, Metropolitan Alexios of Atlanta and was elevated to the rank of Archimandrite on the same day. On February 1, 2007, he was appointed as the Ierokyrix (Itinerant Preacher) of the Metropolis of Atlanta. On September 14, 2007, he received the offikion (rank) of Confessor at the Archangel Michael Greek Orthodox Chapel in Atlanta, GA.

Serving in his role as Itinerant Preacher and Confessor, Metropolitan Gregory travelled extensively throughout the Metropolis of Atlanta, where he has led parish retreats, heard confessions and provided spiritual direction to countless numbers of clergy and faithful. Recognizing his affinity for youth ministry and his administrative skills, he was given the responsibility of overseeing all youth programs in the Metropolis of Atlanta.

With the consecration and enthronment of His Grace, Metropolitan Gregory of Nyssa, the fourth ruling Diocesan Hierarch, the Diocese has entered an exciting new chapter in its history, building on the strong foundation set in place by its founding members and venerable Hierarchs, +Metropolitan Orestes, +Metropolitan Nicholas and +Bishop John.