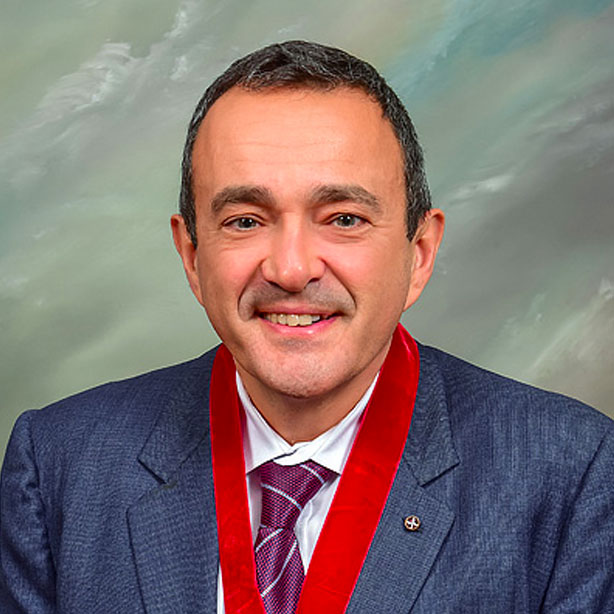 Archon John Zavitsanos was invested an Archon of the Ecumenical Patriarchate in 2004. In 2007, he was elected to the National Council. Since then, he has worked to help enact efficiencies and updates in Archon administration and policies.

The National Commander appointed Archon Zavitsanos to chair the Exarch’s appeal committee in 2014 at a time when the total collections were less than $500,000. He dramatically changed the program by creating the Sponsor A Day Program— which more than doubled the annual contributions. In 2019, the pledged contributions for the first time finally covered the full budget of the Order (over $1.1M). Archon Zavitsanos initiated the Archon Bootcamp in 2017 to train Archons-elect regarding the serious responsibilities they will have going forward to defend the Holy Mother Church. In 2019, he helped revamp the Archon selection process and move it from appointment to an application process, so as to assure that all new Archons do not simply view this as a lifetime achievement award and fully understand the duty and service they promise to provide.

Archon Zavitsanos was also on the committee that hosted Religious Freedom Conferences in Brussels and in Washington, D.C. The summits focused on the persecution of Christians in the Middle East and Turkey. Archon Zavitsanos was also on the international team that assisted with the representation of the Ecumenical Patriarchate in the European Court of Human Rights in Strasbourg, France. The Ecumenical Patriarchate successfully sued the government of Turkey and reclaimed an orphanage it had owned for hundreds of years just outside of Istanbul. The victory over this largest wooden structure in all of Europe was unanimous and precedent setting. He is also a member of Leadership 100.

He has also used his legal skills to help others pro bono, like the nuns of Saint Paraskevi Greek Orthodox Monastery in rural Texas who needed help after the monastery basement flooded. Archon Zavitsanos helped secure millions in their full construction costs to remediate the damage done.

He has served his Houston, Texas community outside of the church as well. He has been a board member of the Houston Lawyer Referral Service and has worked on many pro bono cases over the years, including working on a prisoner abuse case that at that time was one of the largest settlements with the state of Texas. Archon Zavitsanos also was a board member of the Menil Art Museum’s Byzantine Fresco Chapel in Houston. He was also stewardship chairman of his local parish and revamped that program 15 years ago.  The Annunciation Cathedral in Houston now has one of the largest stewardship programs in the country (they collected over $1.5M in 2018). That program now serves as a model for a number of parishes in the United States.

Archon Zavitsanos has been married for 30 years to Joni and has four children. His wife and children all speak Greek. His wife Joni is an artist who focuses on Byzantine iconography like her father Diamantis J. Cassis (also an Archon) before her.

Archon Zavitsanos was born in in a small village in Lefkada, Greece, to a family of shepherds and tradesmen. His father came to the United States working for minimum wage. Five years later, he brought his family here. They moved in with his uncle’s family in a one-bedroom basement apartment in Chicago. His parents were both illiterate and he spoke no English when he came to America. However, his father instilled in him 2 core values: become educated and always support the Church. Archon Zavitsanos was the first person on either side of his family to finish grade school. In a show of gratitude when he graduated with honors from the University of Michigan Law School, he had his father’s name, Socrates Zavitsanos, put on his diploma.

Archon Zavitsanos and his family return every summer to his second home on the island of Lefkada where he runs his law practice remotely.

He is widely regarded as one of the top trial lawyers in Texas who loves trying cases and loves winning. He co-founded his Houston law firm Ahmad, Zavitsanos, Anaipakos, Alavi & Mensing more than 25 years ago. He has tried more than 75 cases to verdict and is the primary author of O’Connor’s Texas Rules * Civil Trials 2018 and 2019, the premier civil trial rules guide for Texas lawyers and judges. He trains lawyers across the country on how to effectively try cases and now represents some of the largest companies in the world. He has appeared in the Wall Street Journal, The New York Times, Forbes, and many other national publications.

Archon Zavitsanos’ considerable talents have been recognized by every possible legal rating service. For 14 consecutive years, he’s been listed by Best Lawyers in America. He’s recognized for his General Commercial Litigation work in Texas by the highly respected Chambers USA: America’s Leading Lawyers for Business, published by London-based Chambers and Partners. He was also named a Benchmark LitigationStar.

He has achieved the highest possible peer rating, AV Preeminent, by Martindale-Hubbell, the premier legal directory, for his Business Litigation practice. He’s been named by his peers as one of the top 100 lawyers in Texas on the annual Texas Super Lawyerslist for the past nine years. And he is board certified in civil trial law by both the Texas Board of Legal Specialization and the National Board of Trial Advocacy, an accomplishment held by less than 1% percent of all practicing lawyers in the state of Texas. He founded his current firm, AZA, in 1993.  It is now a litigation powerhouse in Texas and was named (for the 3rdtime) as the litigation firm of the year in Texas in 2019 by the leading legal publication in Texas.